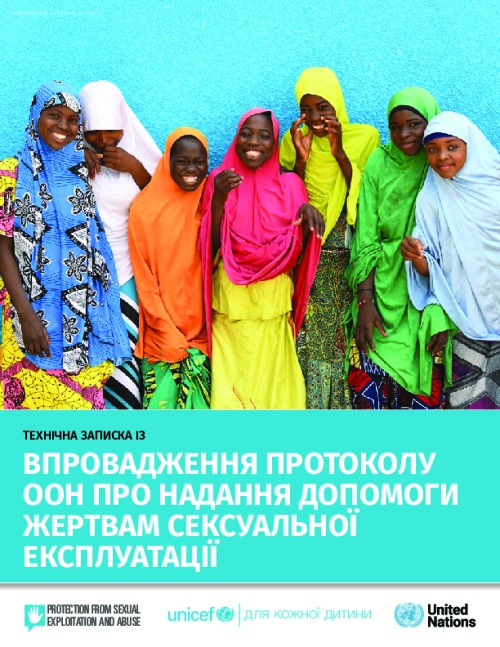 In December 2019, the UN High Level Steering Group endorsed the United Nations Protocol on the Provision of Assistance to Victims of Sexual Exploitation and Abuse (“the Protocol”)(FR, SP, AR). The Protocol outlines a common set of norms and standards based on existing frameworks to strengthen a coordinated, system-wide approach to the provision of assistance and support, which prioritizes the rights and dignity of victims of sexual exploitation and abuse. This approach is aligned with broader United Nations efforts to prevent and respond to sexual exploitation and abuse and takes into account established good practices to address gender-based violence. It also supports the IASC priority to scale up survivor-centered assistance as part of its overall strategy on PSEA.

To support the roll out of the Protocol, UNICEF led the development of a technical note that provides guidance to support the Special Representatives of the Secretary General, Resident and Humanitarian Coordinators, the United Nations Country Teams and the Humanitarian Country Teams, PSEA coordinators and networks, PSEA focal points, gender-based violence and child protection sub-cluster coordinators, specialists and practitioners from other sectors in the area of victim assistance for women and children. The note is an inter-agency product that was developed with a technical reference group that included O/VRA, CDS/DMSPC, UNHCR, UNFPA, IOM and the IASC.

About the Technical Note: