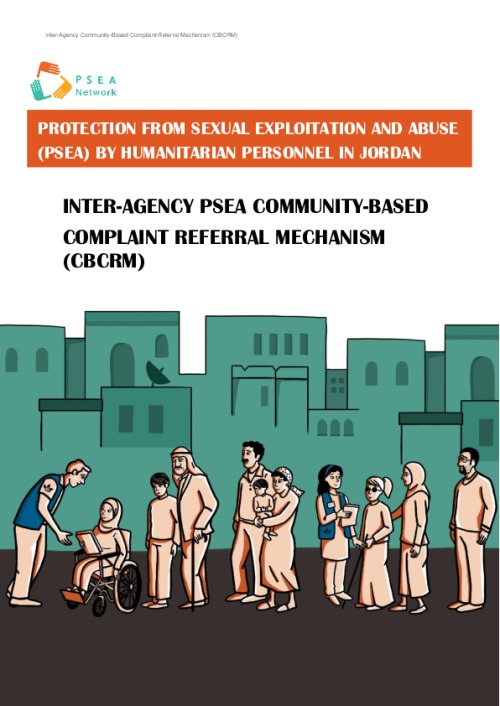 The Inter-Agency Community-Based Complaint Referral Mechanism (herein referred to as the 'CBCRM') in Jordan was developed under the umbrella of the Inter-Agency Network on Protection from Sexual Exploitation and Abuse by Humanitarian Personnel (PSEA Network and the PSEA Task Force). In 2015, the PSEA Network coordinated by UNHCR led to initiating the CBCRM Mechanism, following extensive consultations with refugees, PSEA Network members, and agencies providing humanitarian services within the Refugee Response in Jordan. The discussions involved over 700 refugee women, girls, men, and boys from different backgrounds living in and outside camps, and over 30 agencies and community-based organizations.

In 2020, the PSEA network, co-chaired by UNHCR and INTERSOS, led the revision of the CBCRM Mechanism to strengthen its compliance with a survivor-centered approach as well as good global practices on PSEA. A key priority identified by the members of the network was also to improve the information management system, thus allowing the network to provide more information on SEA trends to the UN Resident Coordinator and UNHCR Representative. A task force was created by the network to review the CBCRM and included UNICEF, OCHA, UNFPA, UN Women, Collateral Repair Project (CRP), UNHCR, and INTERSOS. On 10 February 2020, UNHCR and INTERSOS led an intensive consultative workshop that contributed to the development of the PSEA strategy, work plan, and the CBCRM in hand.

The Co-Chairs presented the CBCRM draft to the Network members who reviewed and validated the draft, and the final version was consolidated on 11 June 2020 and signed in July 2020.