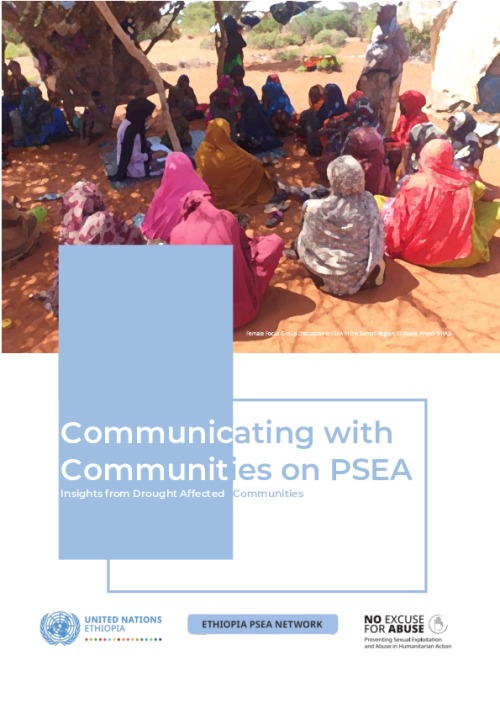 This report provides an overview of the Communicating with Communities Project (CwCP), an initiative led by the Ethiopia Inter-Agency Network for Protection Against Sexual Exploitation and Abuse (PSEA). It emphasises the importance of meaningfully involving women and girls in humanitarian response planning and strategies, and lays out an approach as to how this can be done. The approach builds on Global Women’s Institute’s Empowered Aid concept – a feminist participatory action research methodology that considers women and girls as contextual safeguarding experts and enables local communities to provide feedback to humanitarian actors.

The pilot version of the CwCP was conducted in the Somali Region of Ethiopia between March - May 2022, as part of the Ethiopia PSEA Network’s response to the drought and the sexual exploitation and abuse (SEA) related risks emerging therefrom. Through the project, a total of 11 communities were consulted across four zones. This took place within the framework of 30+ focus group discussions and awareness raising sessions, and the collection of 24 community focal points. A number of interesting conclusions emerged from the community consultations. These will be leveraged across strategic and capacity building efforts of the Ethiopia PSEA Network. For example, varying levels of awareness about SEA were common among camps, with many of those located further away from the regional capital displaying lower levels of SEA knowledge. A number of potential threats and vulnerabilities facing women and girls in drought affected areas were also noted, as well as obstacles to reporting. In addition, communities provided recommendations for establishing a stronger two-way communication between them and humanitarian stakeholders on SEA, and expressed preferences for future SEA engagement and communication efforts.