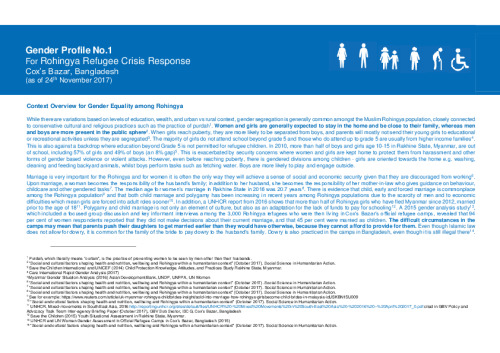 While there are variations based on levels of education, wealth, and urban vs rural context, gender segregation is generally common amongst the Muslim Rohingya population, closely connected to conservative cultural and religious practices such as the practice of purdah1. Women and girls are generally expected to stay in the home and be close to their family, whereas men and boys are more present in the public sphere2. When girls reach puberty, they are more likely to be separated from boys, and parents will mostly not send their young girls to educational or recreational activities unless they are segregated3. The majority of girls do not attend school beyond grade 5 and those who do attend up to grade 5 are usually from higher income families4. This is also against a backdrop where education beyond Grade 5 is not permitted for refugee children. In 2010, more than half of boys and girls age 10-15 in Rakhine State, Myanmar, are out of school, including 57% of girls and 49% of boys (an 8% gap)5. This is exacerbated by security concerns where women and girls are kept home to protect them from harassment and other forms of gender based violence or violent attacks. However, even before reaching puberty, there is gendered divisions among children - girls are oriented towards the home e.g. washing, cleaning and feeding backyard animals, whilst boys perform tasks such as fetching water. Boys are more likely to play and engage outside.